Its vocation is to offer audiences original, sometimes even unusual, programmes on stage or within a space. The company was born from the desire to unite artists around common projects in order to compose programmes that make sense to us, which are dear to our hearts and that we wish to share with audiences. The company is made up of opera singers, a string quartet, pianists, a harpsichord player, an accordionist, a harpist, a light and stage designer, directors etc…

We give great consideration to the marriage of text and music in all of our programmes. To the ways in which poetry and music, words and sounds in their dances, come together, caress each other or crash against each other to reveal the secrets of the human soul.
We invite the audience on a journey for the senses, opening a door on the intimate, on the imaginary, on memories, where the musicians become the gardians of time and the stage designer sculpts space.

The company offers a wide repertoire that spans from opera to american musicals, whilst encompassing early music, tango, melody and song. Musical performances and concerts which we offer to stage, if you so wish, with a view to bringing the music to life even more, as well as return to it its theatricality.
In addition to the concerts and performances, we can also arrange open workshops for audiences to discover the voice and instruments, at the organiser’s behest.

Thanks to her training as an actress and her love of words, Sophie and her team offer audiences performances which are lively, cheerful and witty, and that make music accessible to everybody.

From Women to Women…

When the Catholic kings expelled the Jews from Spain in 1492, a culture rich in two thousand years of history spread throughout the Mediterranean basin. Whatever their destinations, they took with them and treasured their cultural heritage as well as the Judeo-Spanish language most often called Ladino, djudezmo, yahudije or chouadit.

The traditional Sephardic repertoire is a repertoire of women. It was through women, from mothers to daughters, that these songs were transmitted orally through the centuries. These songs talk about their lives, their daily lives, exploring the themes of love, marriage, loneliness, etc…
Most of them carry in them advice passed on to future generations. It’s a repertoire that talks about life, intimate pain, love impulses and the big parties that mark the life I wanted to mix with my own compositions.

With its original instrumentation, the digital percussions from the Orient (Turkey, Iran, Middle East…) played with finesse and dexterity by Antoine Morineau and the Celtic harp, played by Sophie Leleu accompanying her powerful and deep singing, Roots is full of promise. Following Sophie’s discovery of her Sephardic origins, she undertook research on this repertoire at the Centre de Musiques Juives in Paris and then decided to devote a whole program to it that she would mix with her own compositions. It’s a women’s program. During their migrations, the Sephardics, carrying their traditions in them, mixed their music with the cultures of the different host countries they met.With Antoine, they elaborate arrangements of these traditional songs, each for their instruments, alternating writing, improvisations and reading of poems, rhythms sometimes with the timbre of the zarb, sometimes that of the dohola, the daf, the bendir, the req or the udu… At the end of the confinement, they published their new album with Absilone

“A gift from heaven ! With her presence, graceful gestures as a harpist and her voice falling from the sky, Sophie LELEU has all the assets in her sleeves as a high priestess to captivate an audience…
Sophie LELEU, on the contrary of many lyrical artists who attack other registers than the “Repertoire” with a big R, she does not over-play, she does not interpret: she plays… A passion, feelings, traditions with a keen sense of nuance…”

“Secret Paths” is a new program offering a journey through song, poem and melody in different aesthetics.
From the song of our childhood listened to on the old vinyls of our grandparents to the baroque, traditional or folk song listened to during our adolescence, the song has this character of moving us from one state to another, to accompany the transformations and initiatory passages of our lives by telling us who we are.
Through this unexpected patchwork of songs by Mouloudji, Astor Piazzolla, Henry Purcell or Joni Mitchell mixed with the compositions of Sophie Leleu, we interpret the melodies that accompanied our childhood and guided our adolescence and our adult life on intimate paths, giving us their secrets that only our hearts understand.

With Sophie Leleu (harp and singing)

«IJe suis comme je suis » is a show where music and the metamorphoses of an actress,
elevated to the role of muse, depict the universe of the music scene of the thirties.

Sophie Leleu is a joy to behold. Her wide range offers a palette of subtleties and expressive intensities, her presence adapting to all there metamorphoses. This mezzo-soprano transports the listener into a universe of emotions that nourishes every imagination.
S.Lespiaux pour le journal Rue du Théâtre.

The progam presents a mix of Kurt Weill’s songs that he wrote in his german and french periods, around the writing of Bertold Brecht, Jacques Déval, Roger Fernay or even Maurice Magre, but also on a few songs composed by Joseph Kosma for words by Jacques Prévert.
The songs become the strangely realistic reflection of a moment in the lives of two people who were at times partners, at others adversaries, sometimes loving, sometimes hating. They also draw the portrait of a woman affirming her independence, her hunger for freedom, her need offered love and her hopes. All set against the backdrop of the inter-war years, the birth of Nazism and Hitler’s rise to power.

« I have always loved this repertoire for its folly, which offers the opportunity to express a wide range of extreme emotions: love, suffering, heartbreak, hope transfiguring the human soul. I wanted to mesh the expressionistic music of Kurt Weil with the tenderness and humanist poetry of the songs of Kosma and Prevert… Whereas Weill speaks to the visceral, Prevert speaks to the heart », says this remarkable young French mezzo- soprano applauded as a soloist last season at the Théâtre du Châtelet in John Adams’s opera Nixon in China, directed by Chen Shi-zheng.
La Terrasse

“A place on the Earth”

Through this journey, Sophie offers a new program entitled “A place on the Earth”, combining a pannel of songs: early songs, Sephardic melodies, folk songs and some of her own compositions. Accompanying herself on the harp, she takes you into the heart of the firsts songs that have marked her own musical route.

A dazzling bouquet of fiery German melodies, dreamlike French melodies and sublime Italian opera tunes, an enchantment where music becomes a powerful weapon that triumphs the grace and love of fear and death!

It is through this romantic repertoire composed of burning German melodies, dreamlike French melodies and sublime French and Italian opera tunes that we will cross together this theme of enchantment, where music celebrates the deep connection between human beings and nature, opening a contemplative path to its emotions. The voice in light offers a world where this encounter with grace, beauty teaches us to transcend our pains, touching our hearts right.

in concert or stage version 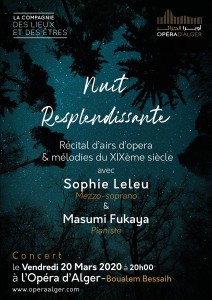 More about the company

The Des Lieux et Des Êtres company and Sophie Leleu
(vocal technique and reading teacher at the Saint-Sulpice seminary and at the Saint-John Community)
offer you the opportunity to pair a performance
with a workshop that will allow participants (aged 7 and above) to discover Voice.

To discover and develop the richness of one’s voice, both spoken and sung, is a way to return to your roots, to express and affirm yourself.
In a playful and judgment free context, these workshops offer the op- portunity to rekindle the vocal instinct and body intelligence, with the objective of allowing “your” voice to express itself freely and naturally.

If Proposition 3, with the Cosmo Quartet, is chosen, we can also offer a workshop introducing the instruments.

These workshops last between one and two hours, according to your wishes.

« Stage design is the art of bringing together different skills, different people, around a single idea,
a single concept in order to create a powerful and harmonious piece of work. »

With the collaboration of :

Graduating from the Ecole Nationale Supérieure des Arts Décoratifs in Paris after first studying at the Beaux Arts in Valence, Christel has specialised in Theatrical Stage design.
Her involvement in the Avignon Festival for more than 10 years has given her the opportunity to work with prestigious directors like Antoine Vitez, Mnouchkine, Peter Brook, Jean Pierre Vincent, and to work on projects alongside lighting designers such as Alain Poisson, André Diot, Patrice Trottier… and she also very quickly joined the Parisian national theatres (Chaillot, Les Amandiers, Odéon…).
Her sensitivity to music has enabled her to become involved in musical shows (the Opera “Tito” with William Christie and Alain Germain in Strasbourg, neighbourhood opera « The Italian in Algiers » with the Cie-In-Sense company at the Théâtre Mouffetard, « The Bridge of the Sighs » with the Tréteaux Lyriques company at the Espace Cardin in Paris, « Carmen » with the Music’halles in various theatres of the south of Paris), as well as more intimate productions for storytellers and musicians whom she both stages and lights.

Concert offer: Our programmes can be tailored to the specific requests of the organisers (specific works requested, intervals…)For each concert: a staging with both lights and scenography is offered. In that case, the participation of the company’s scenographer needs to be taken into account on top of that of the musicians.

Concert duration : one hour with no interval or one hour and fifteen minutes with an interval.

The duration can vary with the shorter propositions.

For propositions 1, 2, 5 and 6, the procurement of a piano or harpsichord is the responsibility of the organiser.Travel expenses from Paris will also be billed for each performer.

The Des Lieux et Des Êtres Company is able to take care of all the administrative formalities relating to the hiring of musicians (all relevant paperwork and contracts, social security costs, pay slips and so on.)

I remain entirely at your disposal in order to put together the show, concert or event that suits your desires.

A brief history of the Company’s productions